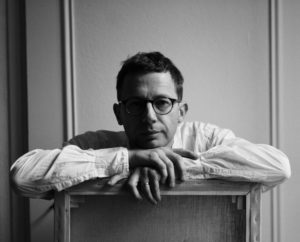 Bertrand Martin was born in 1975 in Verdun, France. He grew up in southern Burgundy. From childhood he was fascinated by sciences and the arts. Under the watchful eye of his grandfather, a watercolourist, he drew from drawing books and periodicals, teaching himself to control his motions and the mysteries of serendipity. As a student, he keenly practiced music at the conservatoire. Parallel to his preparatory engineering classes, he pursued photography and drawing. Scientific objectivity and the act of creation, the contingencies of reality and wandering imagination perpetually nurture this duality in him that he converts into equilibrium. Another world of contrasts started with an artistic brainwave in 1992, when the film Indochine was released. The artist was 17 years old and threw himself into drawing to evoke the sublime, innocent beauty of the face of the young Camille contrasting so much with the violence surrounding her. ‘It is this same eternal and sweet beauty emerging from a chaotic, at times brutal world, that I endeavour to convey in my works today.’ Bertrand gained his engineering degree and presented his drawings that failed to gain the support of the world of art at the time. He therefore decided to put aside temporarily his art and disappeared to Asia. He explored Taiwan, China, Cambodia, Vietnam, Thailand and South Korea immersing himself in the various cultures and the Chinese language.

Once he was back in France, he devoted himself to various senior management positions in the space sector and at the same time achieved an MBA at the prestigious INSEAD Business School. He henceforth progressed in a world of discipline with this concept of going beyond the realms of the possible. But this kind of challenge nevertheless has its limits and as his 40th birthday approached, in 2014, the need to create suddenly arose. This project that had been postponed so many times became indispensable to him like a vital necessity, to give necessary meaning to his life. To begin with he devoted himself to watercolour. Filled with passion, he painted day and night, taking advantage of every moment to draw, driven by this desire to make up for lost time. A period of recognition began. Bertrand was invited to take part in several watercolour fairs, and was awarded with prizes, publications and solo shows. He received good advice from Jean-Louis Morelle, one of the fathers of modern watercolour. In 2016, he decided to extend his practice to oil painting. The artist therefore joints together the blending inherited from his practice of watercolour to the thicker texture of oil paint. Bertrand found his signature style. Today he continues his research to succeed in achieving the very best works of art with always more expressive power. Bertrand Martin is represented by several galleries in Europe, he lives and paints in the South of France.